Klay Thompson is an American professional basketball player for the Golden State Warriors of the National Basketball Association. One of the greatest shooters in NBA history, he is a three-time NBA champion, a five-time NBA All-Star, and a two-time All-NBA Third Team honoree. Born Klay Alexander Thompson on February 8, 1990 in Los Angeles, California, he is the son of former National Basketball Association (NBA) player Mychal Thompson and former University of Portland and University of San Francisco women’s volleyball player Julie Thompson. His younger brother, Trayce, is a Major League Baseball player and his older brother Mychel has played in the NBA Development League. He graduated from Santa Margarita Catholic High School in Rancho Santa Margarita in 2008. Following his high school graduation, Thompson enrolled himself into Washington State University where he played until his senior year when he decided to enter the 2011 NBA Draft. Thompson played his first NBA game against Los Angeles Clippers on December 25, 2011. From October 2014 to late 2015, Thompson was romantically linked to American model and internet personality, Hannah Stocking. 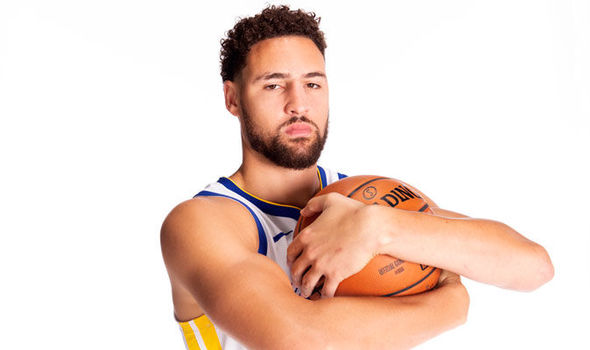 Klay Thompson Facts:
*He was born on February 8, 1990 in Los Angeles, California, USA.
*His father, Myles, was the first overall pick of the 1978 NBA draft
*His family moved to Lake Oswego, Oregon when he was 2 years old.
*His family moved to Ladera Ranch, California when he was 14 years old.
*He was drafted 11th overall by the Golden State Warriors in 2011.
*He was named to the NBA All-Rookie First Team in 2012.
*He won the 2014-2015 NBA title with the Golden State Warriors.
*Became the 20th player in NBA history to score 60 points in one game.
*He is widely considered to be one of the greatest shooters in NBA history.
*Childhood friend and Little League teammate of Kevin Love.
*Thompson owns an English bulldog named Rocco.
*Follow him on Twitter, Facebook and Instagram.