Kobe Bryant was an American professional basketball player. Widely regarded as one of the greatest basketball players of all time, Bryant led the Los Angeles Lakers to five NBA titles in 2000, 2001, 2002, 2009, and 2010. He also won two Olympic Gold medals with the US National basketball team at Olympics 2008 and 2012. He was named NBA MVP in 2008 and selected to the All-NBA First Team 11 times from 2002 to 2013. Bryant retired on April 13, 2016 after scoring 60 points in a Lakers win against the Utah Jazz. Born Kobe Bean Bryant on August 23, 1978 in Philadelphia, Pennsylvania, to parents Pam and Joe Bryant, he was the youngest of three children and only son. He started playing basketball at the age of three and his favorite basketball team was the Los Angeles Lakers while growing up. Bryant played high school basketball at Lower Merion High School in Philadelphia and was chosen as the 13th pick by the Charlotte Hornets in the 1996 NBA Draft. In 2001, he married Vanessa Bryant with whom he had four daughters named Natalia, Gianna, Bianka and Capri. On January 26, 2020, Bryant was killed in a helicopter crash in Calabasas, California at the age of 41. His 13-year-old daughter, Gianna Bryant, and seven others also died in the crash. 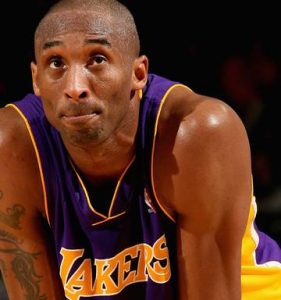 Kobe Bryant Facts:
*He was born on August 23, 1978 in Philadelphia, Pennsylvania, USA.
*He was named after the beef named, Kobe.
*Growing up, his favorite basketball team was the Los Angeles Lakers.
*His father, Joe, was basketball player and coach.
*He graduated with the class of ’96 from Lower Merion High School, Ardmore, PA and made his debut at 18 years, 2 months and 11 days old, the youngest player ever to appear in an NBA game (3 November 1996).
*He played as a shooting guard.
*He won three straight NBA Championships with the Los Angeles Lakers in 2000, 2001 and 2002.
*He was named MVP of the 2002 NBA All-Star Game.
*He won the 2001 and 2002 Teens Choice Award for favorite male athlete.
*He met his future wife, Vanessa Laine Bryant, during a visit to the set of one of Snoop Dogg’s video, where she was working as a model.
*He announced his retirement from the NBA (DEC 2015).
*Widely considered to be one of the greatest basketball players of all time.
*He won an Oscar and Emmy for his movie Dear Basketball.
*Catch Bryant on Twitter, Facebook and Instagram.