Kristen Johnston is an American film, television and theater actress. She is most widely known for her performance as Sally Solomon in the television series 3rd Rock from the Sun, for which she twice won the Primetime Emmy Award for Outstanding Supporting Actress in a Comedy Series. Her other television credits include Ugly Betty, ER, The Exes, Bored to Death, and Sex and the City. In addition to her television appearances, she has also acted in a number of films, including Music and Lyrics, Finding Bliss, Life Happens, Bad Parents, and Hurricane Bianca 2: From Russia with Hate. Her first book was a New York Times Bestselling memoir, titled “GUTS: the endless follies and tiny triumphs of a giant disaster”. Born Kristen Angela Johnston on September 20, 1967 in Washington, D.C., USA, to Rod Johnston, she spent much of her teens traveling as an exchange student to Sweden and South America. She did her schooling from St. Eugene’s Catholic Grade School and Whitefish Bay High School, and studied acting at the Atlantic Theater Company Acting School in New York City. From 1999 to 2000, she dated actor Ryan Reynolds. 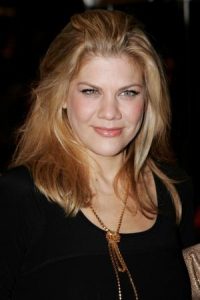 Kristen Johnston Facts:
*She was born on September 20, 1967 in Washington, D.C., USA.
*She spent a large part of her teens as an exchange student in South America and Sweden.
*She won two Emmys for her role in the series 3rd Rock from the Sun.
*She was featured on the cover of punk band Bad Religion’s 1998 album “No Substance”.
*She is a member of the Atlantic Theater Company in New York City.