Ming Xi is a Chinese fashion model. She has appeared in campaigns for many important fashion houses such as Ralph Lauren, Michael Kors, and Givenchy. She appeared in the 2013 Victoria’s Secret Fashion Show. Born Mengyao Xi on March 8, 1989 in Shanghai, China, she was discovered via Elite Model Look contest held in 2009. She studied fashion and acting at Shanghai Donghua University graduating in 2007. She began her acting career in 2016, appearing in the feature, Warrior’s Gate produced by the legendary French director Luc Besson. 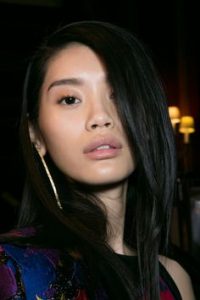 Ming Xi Facts:
*She was born on March 8, 1989 in Shanghai, China.
*She is a 2007 graduate of Shanghai Donghua University.
*She placed third on Elite Model Look in 2009.
*She is good friends with Shu Pei Qin, and Fei Fei Sun.
*She currently resides in New York City.
*Follow her on Twitter, Facebook and Instagram.