Kulbhushan Kharbanda is an Indian actor who appears in Hindi and Punjabi films. He is best known for his role as the antagonist Shakaal in the 1980 Indian action thriller film Shaan, inspired by the character of Blofeld from James Bond movies. He has also appeared in many films, notably Arth (1982), Ek Chadar Maili Si (1986), Fire (1996), Earth (1998), and Water (2005). He has also acted in TV serials, such as Shanno Ki Shaadi and Mahi Ve. Born in Hasan Abdal, Punjab, British India (now Pakistan), he was educated at Kirori Mal College. He is married to Maheshwari Devi Kharbanda. He has one daughter, Shruti Kharbanda. 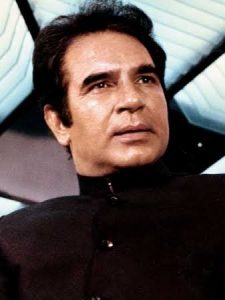 Kulbhushan Kharbanda Facts:
*He was born on October 21, 1944 in Hassan Abdal, Pakistan.
*He played the bald villain Shakaal in the 1980 Indian action thriller film Shaan, directed by Ramesh Sippy.
*He was once was engaged to Seema Sawhni, daughter of director Shaheed Latif.