Kyra Sedgwick is an American actress. She is most famous for her portrayal of Deputy Chief Brenda Leigh Johnson on the TNT crime drama The Closer, for which she won a Golden Globe Award in 2007 and an Emmy Award in 2010. She had a recurring role in the successful sitcom Brooklyn Nine-Nine from 2014 to 2015. For her work in the 1995 film Something to Talk About, she was nominated for a Golden Globe award. Her other well-known films include Phenomenon, Born on the Fourth of July, The Possession, Gamer, Man on a Ledge, Secondhand Lions, Singles, Heart and Souls, What’s Cooking, The Game Plan, and the 2016 comedy-drama movie The Edge of Seventeen. Born Kyra Minturn Sedgwick on August 19, 1965 in New York City, USA, to Patricia and Henry Sedgwick V, she is of English descent on her father’s side, and of Jewish descent on her mother’s side. Her parents separated when she was a young girl, and divorced when she was 6. She moved with her mother to her stepfather Ben Heller’s home, on New York City’s Upper East Side. After graduating from Friends Seminary, she attended Sarah Lawrence College before transferring to the University of Southern California, where she earned a degree in theater. Playing the role of Julia Shearer, she made her professional acting debut at age 16 on the soap opera Another World. Her first film role was in the 1985 feature War and Love. She is married to actor Kevin Bacon with whom she has two children, Travis and Sosie. 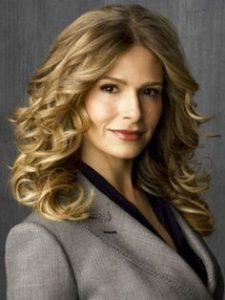 Kyra Sedgwick Facts:
*She was born on August 19, 1965, in New York City.
*She belongs to English and Jewish descent.
*She was six years old when her parents divorced.
*She produced and starred in The Closer.
*Her favorite actresses are Anjelica Huston, Jessica Lange, Diane Keaton, and Meryl Streep.
*Follow her on Twitter and Instagram.