Actress Lacey Chabert was born Lacey Nicole Chabert on September 30, 1982 in Purvis, Mississippi, the daughter of Julie and Tony Chabert. She is of Cajun (French), Italian, English, and Scottish ancestry. She first gained prominence as a child actress on television for her role as Claudia Salinger in the television drama Party of Five (1994–2000). Lacey started in drama and music performances in and around her hometown in Mississippi from an early age, and was a finalist on Star Search (1983) in 1991. She moved to Southern California in 1994 and in 2013, she married David Nehdar. She and David had their first child on September 1, 2016. 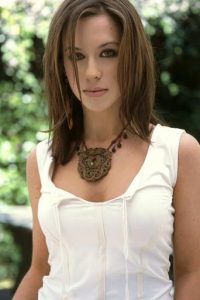 Lacey Chabert Facts:
*She was Miss Jr. Mississippi.
*She was named #56 on the Maxim magazine Hot 100 of 2005 list.
*Her daughter Julia is named at least in part after her mom.
*Follow her on Twitter and Instagram.