Lake Bell is an American actress, screenwriter, and director best known for her roles as Carol Solomon in the 2013 film In a World… and Tipper in the 2008 film What Happens in Vegas. Her other notable film credits include It’s Complicated, Worst Enemy, Under Still Waters and I Do…Until I Don’t. Bell was born to Harvey Siegel and Robin Bell on March 24, 1979 as Lake Caroline Siegel Bell in New York City, New York, USA. Her mother is Protestant and her mother is Jewish. She has an older brother, Luke, and two half-sisters, Courtney and Mackenzie. She has been married to tattoo artist Scott Campbell since June 1, 2013. They have two children: daughter, Nova and son, Ozzie. 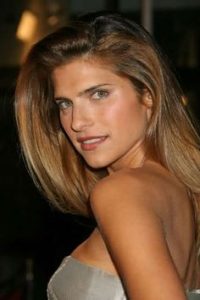 Lake Bell Facts:
*Her mother is Protestant and her mother is Jewish.
*She is an animal-rights activist.
*She loves to painting and drawing.
*She was placed number 32 on the Maxim magazine Hot 100 of 2008 list.
*She dated Pride and Glory co-star Colin Farrell in 2006, but they broke up.
*Follow her on Twitter and Instagram.