Actor and comedian Will Ferrell who rose to fame after appearing on Saturday Night Live. He has gone on to star in several feature films such as Talladega Nights, Step Brothers, Elf, Anchorman: The Legend of Ron Burgundy and Old School. Ferrell was born to Betty Kay, a teacher, and Roy Lee Ferrell, Jr., a musician, on July 16, 1967 in Irvine, California, USA as John William Ferrell. He is of English, German, and Irish descent, and has younger brother, Patrick Ferrell. He has been married to actress Viveca Paulin since 2000. They have three sons, Mattias, Axel and Magnus. 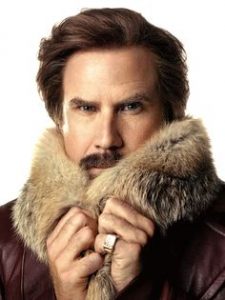 Will Ferrell Facts:
*He belongs to English, German, and Irish descent.
*His family (Parents) were from Roanoke Rapids, North Carolina.
*He was the captain of the basketball team in high school.
*His father was a keyboardist and saxophonist for The Righteous Brothers.
*His wife is of Swedish descent.
*He ran the Boston Marathon on April 21, 2003 with his wife Viveca Paulin.
*Catch him on Facebook.

“I always find it actually funny that the analysis is that the characters I play in comedies are the manchild, the adolescent, characters that refuse to grow up. And yet, if you look back in the history of comedy all the way back to the Marx brothers, that’s a big part of comedy.” – Will Ferrell