Lara Bingle was born on June 22, 1987 in Cronulla, New South Wales, Australia. She is an Australian advertising model, socialite, businesswoman, brand ambassador, fashion designer and television personality, best known for appearing in the 2006 Tourism Australia advertising campaign So where the bloody hell are you?. Before appearing on Australia’s Next Top Model and The Celebrity Apprentice Australia, she was on the cover of magazines like Woman’s Day, OK!, and Grazia. She started modeling at the age of 15. She married Sam Worthington in 2014. The couple welcomed their first son in 2015 and their second son in 2016. Lara has terrific body measurements. She wears 34C bra size and weighs 115 pounds. 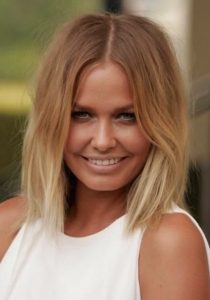 Lara Bingle Facts:
*She has one older brother, Josh Bingle.
*Her father died in May 2008 from liver and pancreatic cancer.
*She started modeling at 15.
*Follow her on Twitter and Instagram.