Lauren Cohan is an American-British actress and model. She is best known for her portrayal of Maggie Greene in the horror television series The Walking Dead, and for her roles as Bela Talbot in the fantasy-horror series Supernatural, Rose in The CW’s supernatural drama TV series The Vampire Diaries, and Vivian McArthur Volkoff in the action comedy series Chuck. In 2019, Cohan began starring in ABC’s drama Whiskey Cavalier. Born on January 7, 1982 in Cherry Hill, New Jersey, she is of English, Irish, and Norwegian descent on her father’s side, and of Scottish descent on her mother’s side. She has four younger siblings and one step-sister. Lauren moved to the United Kingdom, at the age of thirteen. She studied Drama and English Literature at the University of Winchester in Winchester, Hampshire, England. She made her film debut in Casanova (2005) as Sister Beatrice. In 2013, Cohan was romantically linked to Ian Somerhalder. 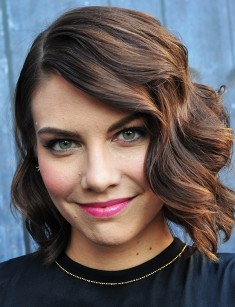 Lauren Cohan Facts:
*She was born on January 7, 1982 in Cherry Hill, New Jersey, USA.
*She moved to England at age 13.
*Her surname “Cohan” comes from her stepfather.
*She is a model turned actress.
*She plays the piano.
*She is a dual American/British citizen.
*Her publicist is Erica Gray.
*She was ranked #41 on Maxim’s “Hot 100” of 2014 list.
*She is best friends with actress Amy Shiels.
*Tom Hanks is her favourite actor.
*Visit her official website: www.laurencohan.com
*Follow her on Twitter, Facebook and Instagram.