Lauren Crace is a British actress. She is best known for portraying Danielle Jones on the BBC soap opera EastEnders from 2008 to 2009, and as Doris Miller on the ITV series Mr. Selfridge from 2013 to 2015. She has also appeared in Room at the Top, Holby City, Doctors, Casualty, Vanity Fair, and Harry Hill’s Alien Fun Capsule. Born Lauren Rose Crace on May 25, 1986 in Birmingham, England, to parents contemporary writer Jim Crace and Pamela Turton, she has an older brother named Thomas. Crace attended Swanshurst School in Billesley and Cadbury Sixth Form College. In 2008, she graduated from London’s Royal Academy of Dramatic Art (RADA). She is married to Michael Stevenson with whom she has a son and twin daughters. 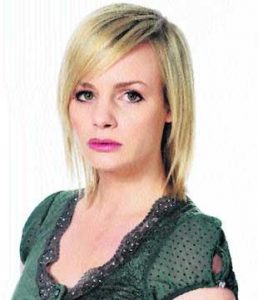 Lauren Crace Facts:
*She was born on May 25, 1986 in Birmingham, England, UK.
*She is the daughter of contemporary English writer Jim Crace and Pamela Turton.
*She attended the famous Royal Academy of Dramatic Art (RADA) in London.
*She started her acting career as an extra in television series.
*From 2008 to 2009, she portrayed Danielle Jones in the BBC soap opera EastEnders.
*She portrayed the recurring role of Doris Millar in ITV drama Mr Selfridge from 2013 to 2015.
*She was a long-standing member of the Stage 2 Theatre Company in Birmingham.
*Follow her on Twitter and Instagram.