Leah Pipes is an American actress of film and television. She is best known for television roles as Katie Clarke on Life Is Wild, Camille O’Connell on The Originals and Jessica Pierson in the 2009 slasher film Sorority Row. Her other notable television credits include Lost at Home, Clubhouse, and The Deep End. Born Leah Marie Pipes on August 12, 1988 in Los Angeles, California, she has two sisters and a younger brother. Leah started her acting career in 2001 on the hit show Angel. In December 2014, she married her boyfriend of 3 years actor A.J. Trauth in Santa Barbara, California, following an 11-month-long engagement. 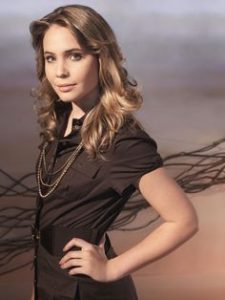 Leah Pipes Facts:
*She was born on August 12, 1988 in Los Angeles, California, USA.
*Began her acting career in 2001.
*She enjoys playing soccer.
*Became engaged to longtime boyfriend, AJ Trauth, in December 2013.
*Visit her official website: www.leah-pipes.org
*Follow her on Twitter and Instagram.