Lexa Doig is a Canadian TV and movie actress. Best known by the public for her title role as Andromeda Ascendant/Rommie in the television series Andromeda. She is also known for her role as Sonya Valentine in the series Continuum from 2012 to 2014. Lexa was born as Alexandra Lecciones Doig on June 8th, 1973, in Toronto, Ontario, to Filipina mother Gloria and Irish-Scottish father David. She has an older brother, Ted Doig. She married Michael Shanks in 2003. They have two children: son, Samuel, and daughter, Mia. 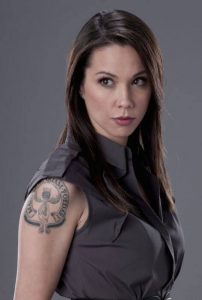 Lexa Doig Facts:
*She has English, Scottish, Irish, and Filipino ancestry.
*She learnt American Sign Language as a teenager.
*As a teenager, she attended rhythmic gymnastics classes.
*She likes to read and rollerblade in her free time.
*Follow her on Twitter and Instagram.