Lily Cole is an English model and actress. She started her modelling career as a teenager and became the youngest model to appear on the cover of British Vogue, and was listed by French Vogue as one of the top 30 models of the 2000s. She has appeared for the leading brands such as Louis Vuitton, Alexander McQueen, Chanel, Jean Paul Gaultier, and Moschino. As an actress, her first starring role was as Valentina in the 2009 film The Imaginarium of Doctor Parnassus. Born in Torquay, Devon, England, UK, on December 27, 1987, to Patience Owen and Chris Cole, Lily Luahana Cole and her sister were raised by their mother in London. She has been in a relationship with Kwame Ferreira since 2012. Together they have a daughter. 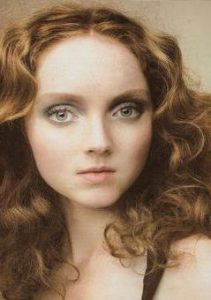 Lily Cole Facts:
*She has English and some Scottish ancestry.
*She had a part as Greta in Snow White and the Hunstman.
*In 2013, PETA named her in the list of “Sexiest Vegetarians of the Year.”
*She maintained top grades in college while modeling.
*She dated Enrique Murciano from 2008 until 2011.
*Visit her official website: www.lilycole.com
*Follow her on Twitter, Facebook and Instagram.