Lineisy Montero is a Dominican fashion model, best known for her work with Prada and her natural Afro hair. She has appeared in campaigns for many important fashion houses and designers such as Balenciaga, Marc Jacobs, Oscar de la Renta, Michael Kors, Chloé, Dolce & Gabbana, Roberto Cavalli, Versace and Céline. She has been featured on the cover of the most prestigious international fashion magazines like Vogue, Elle, Telegraph, i-D, Dazed, and Harper’s Bazaar. Montero is represented by Next Model Management (New York, Paris, Milan, London) and Le Management (Copenhagen, Stockholm). 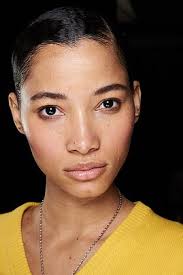 Lineisy Montero Facts:
*Born on February 8, 1996 in Santo Domingo, Dominican Republic, Montero was raised by her mother in a single-parent home.
*She was discovered at an amusement park in her hometown of Santo Domingo.
*She made her debut as a Prada exclusive in 2015.
*She was on the cover of Teen Vogue in 2015.
*The third black model to walk the runway for Prada after Naomi Campbell and Jourdan Dunn.
*Rose Cordero and Binx Walton are among her favorite models/influences.
*Follow her on Instagram.