Lisa Vanderpump is a British restaurateur, actress, writer, and television personality. She is best known for her appearances on Bravo’s The Real Housewives of Beverly Hills and Vanderpump Rules. She competed on the 16th season of Dancing with the Stars. Born Lisa Jane Vanderpump on September 15, 1960 in London, England, UK, she has one brother named Mark. Lisa began her career as an actress. At the age of thirteen, she played Julia Allessio in the 1973 Glenda Jackson film A Touch of Class. She is married to Ken Todd since 1982 and has two children, Max and Pandora. 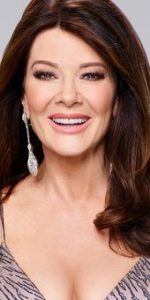 Lisa Vanderpump Facts:
*She was born on 15 September 1960 in London, UK.
*She began her career as an actress.
*She competed on ABC’s Dancing with the Stars in 2013.
*Ken and Lisa have owned 26 restaurants, bars and clubs in London and Los Angeles, including The Shadow Lounge, Pump, Bar Soho, SUR, and Villa Blanca.
*Visit her official website: www.lisavanderpump.com
*Follow her on Twitter, Facebook and Instagram.