Denis Cheryshev is a Russian professional footballer who plays for Spanish club Villarreal CF and the Russian national team as a left winger. He has played for Real Madrid, Sevilla and Valencia. He made his International debut for his home country Russia in 2012. Born Denis Dmitriyevich Cheryshev on December 26, 1990, in Nizhny, Novgorod, Russia, his father, Dmitri Cheryshev, is a Russian former footballer who played as a forward, and is a current manager. He began his youth career at Sporting de Gijón, where his father was playing at the time. He is a participant at the 2018 World Cup. 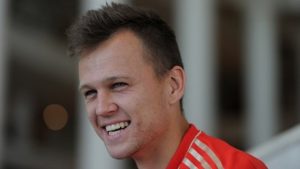 Denis Cheryshev Facts:
*He was born on December 26, 1990, in Nizhny, Novgorod, Soviet Union.
*He joined Real Madrid’s youth program in 2002.
*In 2013, he made his professional debut as a member of the Russian National Team in a World Cup-qualifying game.
*Follow him on Twitter and Instagram.