Logan Lerman is an American actor, best known for portraying Percy Jackson in the Percy Jackson film series. He played Charlie Kelmeckis in the 2012 coming-of-age dramas The Perks of Being a Wallflower. He has also starred in the films The Butterfly Effect, 3:10 to Yuma, The Three Musketeers, The Number 23, Indignation, The Vanishing of Sidney Hall, Meet Bill, Gamer, My One and Only, Hoot, Noah and Fury. His television credits include Jack & Bobby, 10-8: Officers on Duty, and the Amazon series Hunters. For his performance as Luke Chandler in the 2003 TV movie A Painted House, Lerman earned a Young Artist Award for Best Performance by a Leading Young Actor. Born Logan Wade Lerman on January 19, 1992 in Beverly Hills, California, to parents Lisa and Larry Lerman, he has an older sister named Lindsey, and an older brother named Lucas. Lerman was educated at Beverly Hills High School and New York University. He was once engaged to actress Alexandra Daddario. 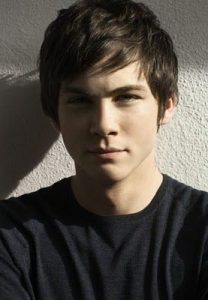 Logan Lerman Facts:
*Born on January 19, 1992 in Beverly Hills, California, his parents are both of Jewish descent.
*His mother works as his manager, and his father is an orthotist and businessman.
*He is best friends with Dean Collins.
*His family owns a prosthetics company named Lerman & Son.
*He plays the piano and is a fan of movie music compositions.
*He is a fan of LA Lakers.
*He has two dogs named Stella and Lola.
*Visit his official website: www.loganlerman.com
*Follow him on Twitter, Facebook and Instagram.