Lori Loughlin is an American actress. Best known by the public for her role as Rebecca Donaldson on the ABC sitcom Full House from 1988 to 1995 and its sequel as a recurring character on Fuller House. She played Ava Gregory on The WB series Summerland (2004-2005), which she also co-created and produced. Lori was born as Lori Anne Loughlin in Queens, New York and grew up in Hauppauge, Long Island. She belongs to Irish descent. She has been married to Mossimo Giannulli since 1997. They have two daughters, Isabella Rose and Olivia Jade. She was previously married to Michael Burns. 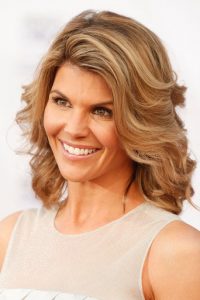 Lori Loughlin Facts:
*She has Irish ancestry.
*At age 12, she began her career as a print model.
*She was born in Queens but grew up in Hauppauge.
*Follow Lori on Twitter, Facebook and Instagram.