Khaled Mohamed Khaled, better known simply as DJ Khaled, is one of the most popular celebrities in music, and is a huge YouTube star. He released his debut studio album Listennn… the Album in June 2006 which reached #3 on US’s Top Rap Albums. DJ Khaled was born as Khaled Mohamed Khaled in New Orleans, Louisiana to Arabic parents. He began his career as a Florida radio DJ in the 1990s. He won the DJ of the Year Award at the Ozone Awards in 2006. He has a son named Asahd, and the mother is his longtime fiancée Nicole Tuck. 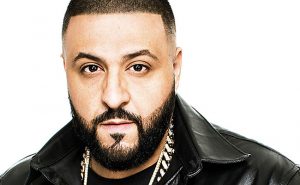 Relationships / Affairs / Boyfriend:
He is engaged to Nicole Tuck, who gave birth to their son, Asahd, on October 23, 2016.

DJ Khaled Facts:
*He belongs to Palestinian descent.
*He is a huge YouTube star.
*He owns a record label named We The Best Music Group.
*He dropped the name Arab Attack after the 9/11 attacks as he did not want to appear insensitive.
*He loves to collect sneakers and his sneakers collection is in thousands.
*Follow him on Twitter, Facebook, YouTube, Myspace, and Instagram.