Luca Lionello is an Italian actor. He is best known for his performance as Judas Iscariot in Mel Gibson’s The Passion of the Christ. He has also portrayed at least two other Apostles: St. Barnabas in Imperium: St. Peter, and St. Thomas in Abel Ferrara’s Mary. Born on January 9, 1964 in Rome, Lazio, Italy, he is the son of actor Oreste Lionello and actress Ninni Lionello, and brother to director Fabio Luigi Lionello, actress Cristiana Lionello, dubber Alessia Lionello and actor Davide Lionello, nephew of actress Irene Cefaro. 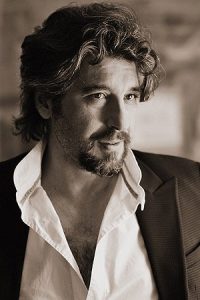 Luca Lionello Facts:
*He was born on January 9, 1964 in Rome, Lazio, Italy.
*His parents are actor Oreste Lionello and actress Ninni Lionello
*He played the role of Judas Iscariot, the apostle who betrays Jesus with a kiss in the Garden of Gethsemane, in The Passion of the Christ.
*Luca was an atheist until 2004, when he became a Catholic, owing to his experience filming The Passion of the Christ.