Luke Bryan is an American country music singer and songwriter, best known for his many hit singles, including “Rain Is a Good Thing,” “Kiss Tomorrow Goodbye,” “Someone Else Calling You Baby,” “Drink a Beer,” “That’s My Kind Of Night,” “Crash My Party,” “Play It Again,” “Kick the Dust Up,” “I Don’t Want This Night to End,” and “Drunk on You.” He has sold over seven million albums and 27 million singles worldwide. He received the Academy of Country Music Awards, the Country Music Association Awards “Entertainer of the Year” award in 2013. For his song “I Don’t Want This Night To End,” he won the CMT Video of the Year Music Award in 2012. Luke became a judge on the revamped American Idol in 2008. Born Thomas Luther Bryan on July 17, 1976 in Leesburg, Georgia, USA, to LeClaire and Tommy Bryan, he was educated at Lee County High School and Georgia Southern University. He used to sing for his local church while growing up. He began his career by writing songs for Billy Currington and Travis Tritt. He is married to Caroline Bryan, with whom he has two sons, Thomas and Tatum. 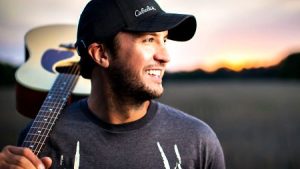 Luke Bryan Facts:
*He was born on July 17, 1976 in Leesburg, Georgia, USA.
*He and his wife, Caroline Bryan, were college sweethearts.
*His older brother, Chris, was killed in a car accident.
*He cites George Strait, Alan Jackson, Alabama, and Merle Haggard as big influences.
*He is friends with Willie Robertson.
*Visit his official website: www.lukebryan.com
*Follow him on Twitter, YouTube, Facebook and Instagram.