Madelaine Petsch is an American actress who became recognized for her role as Cheryl Blossom in the Riverdale series. She also starred as Eliza in the fantasy thriller movie, The Curse of Sleeping Beauty. Madelaine was born in Los Angeles, California and spent most of her childhood between the United States and South Africa. She has dual American-South African citizenship. She has a brother named Shaun. 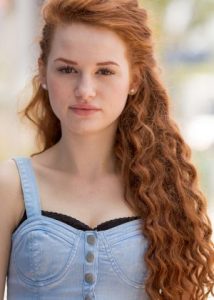 Madelaine Petsch Facts:
*Her family had moved to South Africa when she was eight years old.
*She moved from South Africa to L.A at the age of 18, to pursuit her actress career.
*She had the desire of becoming an actress, since she was 3 years old.
*She is a natural red head.
*She was high agnostic and vegetarian. It was at the age of 14 that she became a vegan, and participated in a PETA awareness campaign.
*Follow her on Twitter, Facebook and Instagram.