Madhuri Dixit is an Indian actress who appears in Hindi films. A leading actress in the 1980s, 1990s and early-2000s, Dixit has been praised by critics for her acting and dancing skills. Her accolades include six Filmfare Awards, three Screen Awards, and two Zee Cine Awards. In 2008, the Government of India honoured her with the Padma Shri, the fourth highest civilian award. Her first role was in the 1984 film Abodh. Her notable film credits include Tezaab, Prem Pratigyaa, Dil, Saajan, Beta, Khalnayak, Anjaam, Hum Aapke Hain Koun..!, Raja, Yaraana, Dil To Pagal Hai, Pukar, Lajja, Devdas, Aaja Nachle and Dedh Ishqiya. Born in Mumbai to Brahmin family, she is the daughter of Shankar and Snehlata Dixit. She has been married to Sriram Madhav Nene since 1999. They have two children. 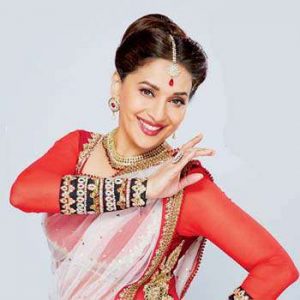 Madhuri Dixit Facts:
*She was born into a Hindu Brahmin family.
*She made her acting debut in the 1984 film Abodh.
*She had the desire of becoming a dancer since she was 3 years old.
*Follow her on Twitter, Facebook, Google+, YouTube, and Instagram.