Maite Kelly is a singer and songwriter of Irish-American descent. Born in Berlin, Germany, she came to prominence with her musical family The Kelly Family, a multi-generational pop group that achieved success in Europe in the 1990s. Her hit albums include “Das volle Programm”, “Sieben Leben fur dich” and “Wie ich bin”. Kelly’s notable hit songs include “Every baby, Roses of red”, “Weil du mich lasst”, “I wanna be loved, History” and “So wie man tanzt so liebt man”. Born Maite Star Kelly on December 4, 1979 in Berlin, Germany, to parents Dan and Barbara-Ann Kelly, she is the younger sister of Paddy Kelly, Barbie Kelly, Joey Kelly, Jimmy Kelly, Patricia Kelly, and John Kelly, and younger half-sister of Kathy Kelly. Maite wrote her first song “All I say” at age eleven. Initially she was known as a member of the band The Kelly Family. From 2005 to 2018, Kelly was married to Florent Michel Raimond with whom she had three daughters. 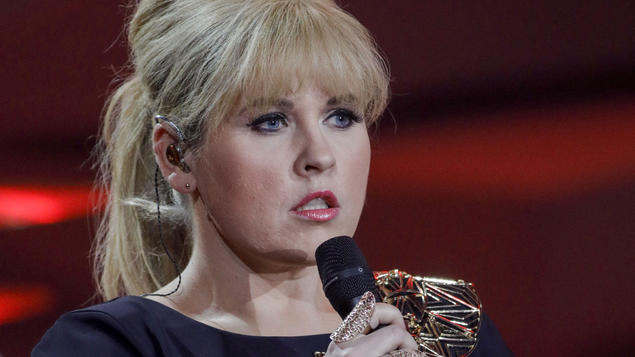 Maite Kelly Education:
She graduated from high school in 2000.

Maite Kelly Facts:
*She was born on December 4, 1979 in Berlin, Germany.
*She is the eleventh of twelve siblings of the Irish American family band Kelly Family.
*She lost her mother to breast cancer at the age of three.
*She earned the Die Eins der Besten Award in 2016 and the smago! Award in 2017.
*She is fluent in English, French, German and a bit of Spanish.
*Her favourite artists are Amanda Marshal and Johnny Lang.
*Visit her official website: www.maitekelly.de
*Follow her on Twitter, YouTube, Facebook and Instagram.