Marie Osmond is an American singer, actress and doll designer. She is best known as a member of the show business family the Osmonds. She hosted a variety show called The Osmonds along with her brother Donny. Her most famous song is a cover of the country pop ballad “Paper Roses”. Born Olive Marie Osmond on October 13, 1959 in Ogden, Utah, USA, to Olive and George Osmond, she is the only daughter of nine children. She grew up as a member of The Church of Jesus Christ of Latter-day Saints. She belongs to Welsh, English, Danish, Scottish, Northern Irish (Scots-Irish), Swiss-German and Dutch descent. 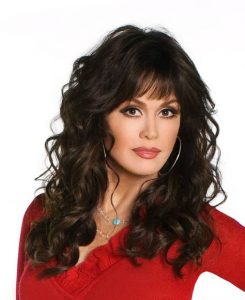