Mariska Hargitay is an American actress. She is most famous for her portrayal of Detective/Sergeant/Lieutenant Olivia Benson on the NBC drama series Law & Order: Special Victims Unit, for which she won a Primetime Emmy Award and Golden Globe Award. Hargitay’s other notable works include Falcon Crest, Downtown, Tequila and Bonetti, Can’t Hurry Love, ER, Lake Placid, Bank Robber and Leaving Las Vegas. Born Mariska Magdolna Hargitay on January 23, 1964 in Santa Monica, California, to Mickey Hargitay and Jayne Mansfield, she is the youngest of their three children. After graduation from high school in 1982, she attended at UCLA, where she majored in theater. Playing the role of Donna, she made her first film appearance in 1985 with horror-comedy film Ghoulies. She made her television debut in 1986’s Downtown as Jesse Smith. She has been married to Peter Hermann since 2004. They have three children. 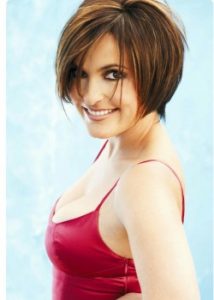