Mark Ballas is an American dancer, choreographer, singer-songwriter, musician, and actor. He is best known for his appearances in the reality dance competition, Dancing with the Stars. He joined the show in season five during the fall of 2007 and was nominated for an Emmy for Outstanding Choreography in 2011. in March 2011, he released his first solo CD HurtLoveBox. Born Mark Alexander Corky Ballas Jr. on May 24, 1986 in Houston, Texas, U.S. to Shirley and Corky Ballas, he is of Mexican, Greek and Spanish descent on his father’s side, and of English and Irish descent on his mother’s side. His parents owned a dance studio in Houston, Texas, where he learned dancing along with Derek Hough and Julianne Hough. He has been married to singer BC Jean since 2016. 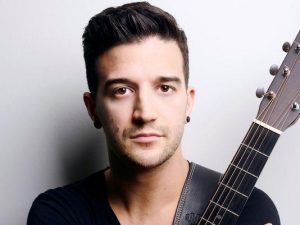 Mark Ballas Facts:
*He is of Greek, Mexican, Spanish, English and Irish descent.
*He grew up with Derek and Julianne Hough.
*He learned to play the guitar at the age of 9.
*Along with Julianne Hough, he won the Junior Latin American Dance Championship and the gold medal at the Junior Olympics.
*Kim Kardashian was his partner during Season seven of Dancing with the Stars.
*He is very fond of collecting guitars and sneakers.
*Visit his official website: www.markballas.com
*Follow him on Twitter, YouTube, Facebook and Instagram.