Martha Hunt is an American model and Victoria’s Secret Angel. She walked the Victoria’s Secret Fashion Show in 2013, 2014, 2015, 2016, 2017 & 2018. Hunt became a Victoria’s Secret Angel in April 2015, and has been the face and spokesmodel for the Free People brand since 2013. She has appeared in campaigns for many important fashion houses, and has been featured on the cover of a number of publications including Elle, GQ, Harper’s Bazaar, Allure, Vogue China and Vogue Russia. Born Martha Seifert Hunt on April 27, 1989 in Wilson, North Carolina, she attended high school at Ibstock Place School in Roehampton. Hunt was discovered by a photographer in Charlotte, North Carolina, and introduced her to modeling agencies. She signed with IMG Models in 2012. She began dating photographer Jason McDonald in 2015. 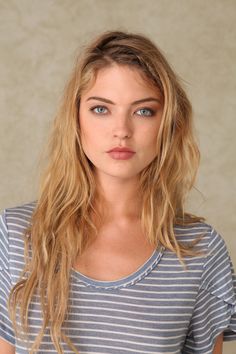 Martha Hunt Facts:
*She was born on April 27, 1989 in Wilson, North Carolina, USA.
*Her ancestry includes Cornish, English, French, German, Irish, Scots-Irish (Northern Irish), Scottish, Welsh, Swiss-German and Cherokee.
*She has been modeling for Victoria’s Secret since 2012.
*She became the face and spokesmodel for the Free People brand in 2013.
*She is good friends with models Cailin Hill and Barbara Berger.
*Follow her on Twitter, Facebook and Instagram.