Martin Braithwaite is a Danish professional footballer who plays for Spanish club Barcelona and the Denmark national team. He plays mainly as a forward but can also play as as a winger. He played for Esbjerg fB from 2009–2013, for Toulouse from 2013–2017, for Middlesbrough from 2017–2019, for Leganés from 2019–2020 and has played for Barcelona since 2020. Braithwaite made his senior debut for the Danish national team in June 2013 in a friendly against Georgia, and was part of the 2018 FIFA World Cup, also featuring at UEFA Euro 2020. 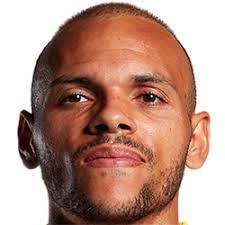 Born Martin Christensen Braithwaite on June 5, 1991 in Esbjerg, Denmark, to parents Heidi and Keith Braithwaite, he has a younger sister, Mathilde who plays football for KoldingQ and for Denmark’s U-16 national women’s football team. He is married to French journalist and TV personality Anne-Laure Louis Braithwaite. Together they have two sons. He is also the stepfather of his wife’s two children from a previous marriage.

Martin Braithwaite Facts:
*He was born on June 5, 1991 in Esbjerg, Denmark.
*He is the nephew and business partner of the Danish-born, American-based, real estate developer Philip Michael.
*He began playing football in the academy at Sædding-Guldager Idrætsforening (SGI).
*He made Denmark’s squad for the 2018 FIFA World Cup in Russia.
*He joined Barcelona in 2020.
*Follow him on Twitter, Facebook and Instagram.