Savannah Guthrie is an American broadcast journalist and attorney, best known as a main co-anchor of the NBC News morning show Today, a position she has held since July 2012. Guthrie served as a White House correspondent between 2008 and 2011 and as co-anchor of the MSNBC program The Daily Rundown in 2010 and 2011, and was announced as the co-host of Today’s third hour alongside Natalie Morales and Al Roker. 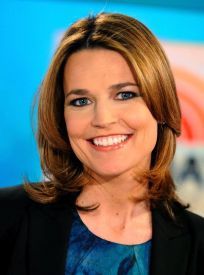 Savannah Guthrie Facts:
*Born on December 27, 1971 in Melbourne, Australia, she moved to Tucson at age 2.
*She was named after her great-great-grandmother.
*Her father who was a mining engineer, passed away from a heart attack when Savannah was 16.
*In September 2007, Guthrie joined NBC News as a legal analyst and correspondent.
*She served as a White House correspondent from 2008 to 2011.
*She plays the guitar.
*Follow her on Twitter, Facebook and Instagram.