Martin Clunes is a British actor, comedian, film director and television presenter. He is best known for his portrayal of Martin Ellingham in the ITV drama series Doc Martin, and for his role as Gary Strang in the sitcom Men Behaving Badly, for which he won a British Comedy Award and BAFTA award. He has also played prominent roles in the films Dancing Queen, Hunting Venus, Staggered, Shakespeare in Love, Sweet Revenge, Nativity 3: Dude, Where’s My Donkey?, and Saving Grace. Born Alexander Martin Clunes on November 28, 1961 in Wimbledon, London, United Kingdom, to parents Daphne Acott and Alec Clunes, he has an older sister named Amanda. Clunes attended Royal Russell School in Surrey and the Arts Educational School in Chiswick, London. He made his television debut playing a camp alien prince in Doctor Who: Snakedance: Part One (1983). In 1997, he married Philippa Braithwaite. Together they have one daughter, Emily Clunes. He was previously married to Lucy Aston. 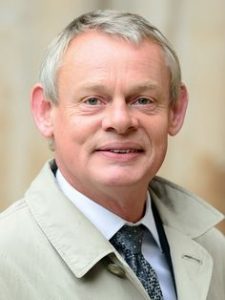 Martin Clunes Facts:
*He was born on November 28, 1961 in Wimbledon, London, United Kingdom.
*His father died of lung cancer when Clunes was 8 years old.
*He is a cousin of the actor Jeremy Brett.
*He attended kindergarten with Peter Morgan.
*He had his first television role on Doctor Who.
*He is a keen camper-van driver.
*He is President of the British Horse Society.