Martina Stoessel is an Argentine actress and singer. She gained international attention with her performance of Violetta Castillo on the Disney Channel Latin America original telenovela, Violetta. She provided the voice of Carrie Williams in the Italian dubbed version of the 2013 movie Monsters University. In 2017, she guest-starred as herself in an episode of the telenovela Las Estrellas. Also a singer, Stoessel’s debut studio album, Tini, topped the charts in her home country of Argentina whilst also getting into the top twenty in France, Germany, Italy, Austria, Belgium, Portgual and Spain. Born Martina Alejandra Stoessel Muzlera on March 21, 1997 in Buenos Aires, Argentina, to Alejandro Stoessel and Mariana Muzlera, she has an older brother named Francisco. While growing up, she studied piano, singing, and dance. She attended at two private bilingual schools: Colegio San Marcos and Colegio Martín y Omar de Isidro. She dated model Pepe Barroso Silva from 2016 until 2018. She was previously in a relationship with Argentine actor Juan Pedro Lanzani from 2013 to 2015. 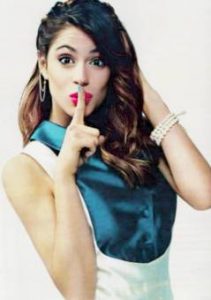 Martina Stoessel Facts:
*She was born in Buenos Aires, Argentina on March 21, 1997.
*She is the daughter of Mariana Muzlera and Alejandro Stoessel (television producer and director).
*She speaks Spanish, Italian and English fluently.
*In 2013, she released a non-album song “In My Own World.”
*She released “Por Que Te Vas”, a collaboration with Cali y El Dandee, as the fifth single from her second album on November 2, 2018.
*She is best friends with Mercedes Lambre.
*She has a tattoo on her right wrist with the words “All You Need Is Love.”
*Visit her official website: www.tinistoessel.com
*Follow her on Twitter, Facebook, YouTube and Instagram.