Martyn Ford in an English bodybuilder, fitness model and actor. He stands 6 feet 8 inches tall and weighs 320 pounds. As an actor, he has appeared in Koshmar the nightmare, Kingsman: The Golden Circle, Undisputed, Redcon-1, and Accident Man. Also a social media influencer, he has more than 1.2 million followers on Instagram. Born on May 26, 1982 in Minworth, Birmingham, West Midlands, he started his career as a cricketer. He played cricket for Warwickshire till an injury at the age of nineteen forced him to leave his cricketing dreams. He has been married to Sacha Stacey since 2009. They have two daughters together. 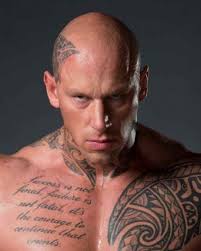 Martyn Ford Facts:
*He was born on May 26, 1982 in Minworth.
*He is famous as The Nightmare.
*He wanted to become a professional cricket player.
*He has two daughters with his wife, Sacha Stacey.
*Follow him on Facebook and Instagram.