Melissa Benoist is an American actress, dancer and singer. She is best known for playing the role of Kara Danvers/Supergirl in the television series Supergirl since 2015. From 2012 to 2014, Benoist portrayed Marley Rose in the Fox musical comedy-drama television series Glee, for which she was nominated for a 2013 Teen Choice Award. In 2018, she played Rachel Koresh in the miniseries Waco. In addition to her television appearances, she has also acted in a number of films, including The Longest Ride, Danny Collins, Lowriders, Whiplash, Patriots Day and Sun Dogs. She made her Broadway debut in 2018 as Carole King in Beautiful: The Carole King Musical. Born Melissa Marie Benoist on October 4, 1988 in Littleton, Colorado, USA, to parents Julie and Jim Benoist, she has two sisters: Kristina, an ecological scientist and Jessica, a novelist. Melissa began dance classes at the age of 3. Following graduation from Arapahoe High School in 2007, Melissa moved to New York City to pursue a career in musical theatre. She attended and graduated in 2011 from Marymount Manhattan College with a Bachelor of Arts in Theatre arts. She was married to Blake Jenner from 2015 to 2017. In 2017, she started dating her Supergirl co-star Chris Wood. 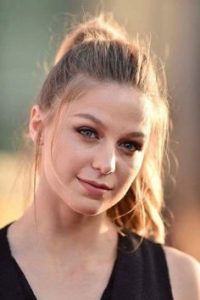 Melissa Benoist Facts:
*She was born on October 4, 1988 in Littleton, Colorado, USA.
*She is of French descent on her paternal great-grandfather’s side, and the rest of her ancestry is English, German, and Scottish.
*She was a wallflower in her high school.
*She has three tattoos: a feather and the word “free” on the back of her neck, a wolf on her left wrist, and a bicycle on her left foot.
*Due to an eye injury, she has unequal size of the eyes’ pupils.
*Follow her on Twitter and Instagram.