Melissa Etheridge is an American rock singer-songwriter, musician, and gay rights and environmental activist. She won two Grammy Awards for “Best Female Rock Performance” in 1992 and 1994. Melissa’s notable hit songs include “I’m the Only One” and “Come to My Window.” In 1988 she released her self-titled debut album “Melissa Etheridge, which achieved remarkable success, reaching #22 on the Billboard 200, and its lead single, “Bring Me Some Water”, garnered Etheridge her first Grammy Award nomination for Best Rock Vocal Performance, Female. Born Melissa Lou Etheridge on May 29, 1961 in Leavenworth, Kansas, USA, to Elizabeth (Williamson), a computer consultant, and John Etheridge, an American Constitution teacher, she has one older sister. She attended David Brewer School and graduated from Leavenworth High School (LHS) at 10th Avenue and Halderman. She was only 8 when she started playing guitar. 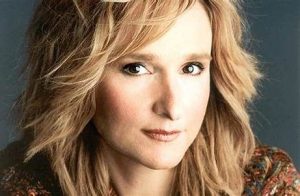 Melissa Etheridge Facts:
*She was born on May 29, 1961 in Leavenworth, Kansas, USA.
*She is known for her raspy-voiced rock-and-roll singing.
*Her hit singles “Come to My Window” and “Ain’t It Heavy” both won Grammy Awards.
*She was voted #49 on VH1’s 100 Greatest Women of Rock N Roll.
*She is a huge fan of Bruce Springsteen and the Dave Matthews Band.
*She is close friends with Brad Pitt.
*Visit her official website: www.melissaetheridge.com
*Follow her on Twitter, YouTube, Myspace, Facebook and Instagram.