Melissa Joan Hart is an American actress. She is best known for her performances as Clarissa Darling in Clarissa Explains It All, as Sabrina Spellman in Archie based series, Sabrina, the Teenage Witch, and as Mel Burke in Melissa & Joey. She has also done voice work in the films Santa Mouse and the Ratdeer, Batman Beyond: Return of the Joker, and Recess: School’s Out. Born Melissa Joan Catherine Hart on April 18, 1976 in Smithtown, Long Island, New York, to Paula and William Hart, she was raised in Sayville, New York. Her acting career began when she was four years old, when she appeared in a commercial for a bathtub toy called Splashy. She has been married to Mark Wilkerson since 2003. They have three children. 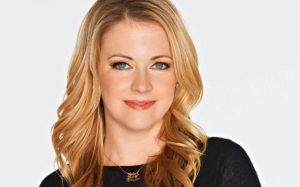 Melissa Joan Hart Facts:
*She is the eldest of eight children.
*She was named after the Allman Brothers song “Melissa.”
*She is the niece of Mark Voje, Stanley Voje and Neil Voje.
*In 2009, she competed with Mark Ballas on Dancing with the Stars.
*She is a big fan of Audrey Hepburn and Shirley Temple.
*In 2016, she won a game of Celebrity Family Feud.
*Her Hobbies include snowboarding, hockey and watching TV, movies, guitar, flute and painting.
*She has three dogs named Halleakala, Pelé, and Cooper.
*Follow her on Twitter, Facebook and Instagram.