Meryl Streep is an American actress who is widely considered one of the best actresses of her generation. Throughout her career, she has won three Academy Awards and has been nominated for 21 in total. She has also received 31 Golden Globe nominations, winning eight—more nominations and competitive wins than any other performer. Her notable film appearances include: The Devil Wears Prada, Mamma Mia!, Music of the Heart, Out of Africa, Sophie’s Choice, Doubt and The Bridges of Madison County. Born Mary Louise Streep on June 22, 1949 in Summit, New Jersey, to Harry William Streep, Jr. and Mary Wolf Wilkinson, her father was of German and Swiss-German descent, and her mother had English, Irish, and German ancestry. She has two younger brothers, Dana David and Harry William III. She was educated at Bernards High School in Bernardsville, New Jersey and Vassar College in Poughkeepsie, New York. She earned a Masters of Fine Arts degree from the Yale School of Drama. She made her stage debut in Trelawny of the Wells in 1975. She received her first Academy Award nomination for her role in the 1978 drama film The Deer Hunter with Robert De Niro. She has been married to Don Gummer since 1978. They have four children, son Henry Wolf Gummer and daughters Mary Willa Gummer, Grace Jane Gummer, and Louisa Jacobson Gummer. 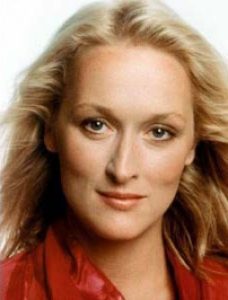 Meryl Streep Facts:
*She was born in Summit, New Jersey on June 22, 1949.
*She was a cheerleader and homecoming queen in high school.
*She began her acting career on the stage.
*In 2010, President Barack Obama awarded her the National Medal of Arts.
*She used to work as a waitress at The Hotel Somerset in New Jersey before starting her acting career.
*In 2009, she was ranked #87 on Ellen DeGeneres’ most sexy movie actors list.
*She was romantically linked with actor John Cazale from 1976 to 1978.
*She was close friends with late actress Natasha Richardson.
*She is a big fan of actor Leonardo DiCaprio.
*She is friends with Viola Davis and Diane Keaton.
*Visit her official website: www.merylstreeponline.net