Mia Farrow Biography, Height, Age, Weight, Measurements, Family will be discussed here. Mia Farrow personal details can be checked here. She has appeared in more than 50 films, and has won numerous awards, including a Golden Globe, and been nominated for three BAFTA Awards.

Mia Farrow is an American actress, activist, and former fashion model. She portrayed Rosemary Woodhouse in the horror film Rosemary’s Baby, for which she earned a nomination for a BAFTA Award and a Golden Globe Award for Best Actress. She received a third Golden Globe nomination for her role in John and Mary. Her other notable film appearances include: The Great Gatsby, Alice, Hannah and Her Sisters, The Ex, The Omen, and Dark Horse.

Born as María de Lourdes Villiers Farrow on February 9, 1945 in Los Angeles, California, Mia is the eldest daughter of Australian director John Farrow and Irish actress Maureen O’Sullivan. She is of English descent on her father’s side, and of Irish, English, and Scottish descent on her mother’s side. She appeared in a movie with her mother at the age of two.

Farrow was married to singer Frank Sinatra from 1966 to 1968. She was also married to Andre Previn from 1970 to 1979. She dated Woody Allen for more than a decade before the relationship ended in scandal. 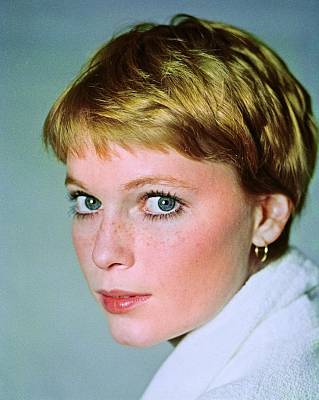 Mia Farrow Facts:
*She was born on February 9, 1945 in Los Angeles, California, United States.
*She contracted polio as a 9-year-old child.
*She was included in Time Magazine‘s list of ‘100 Most Influential People in the World’ in 2008.
*She became the first American actress to join the Royal Shakespeare Company.
*She is good friends with singer Carly Simon and Sharon Tate.
*She’s childhood friend of Candice Bergen and Liza Minnelli.
*Follow her on Twitter and Instagram.