John Stamos Biography, Family, Height, Weight, Age, Measurements will be discussed here. John Stamos personal details can be checked here. He was nominated for the Daytime Emmy Award for Outstanding Supporting Actor in a Drama Series in 1984, for his contract role as Blackie Parrish on the ABC television series General Hospital.

John Stamos is an American actor, producer, musician and singer. He is best known for his portrayal of Blackie Parrish on the soap opera General Hospital, and for his role as Jesse Katsopolis on the ABC sitcom Full House. From 2005 to 2009, Stamos starred as Dr. Tony Gates on the NBC medical drama ER. He also had a recurring role on the USA Network drama Necessary Roughness in 2013, and was cast as the lead character, Jimmy Martino, in the FOX comedy series Grandfathered in 2015.

Born John Phillip Stamos on August 19, 1963 in Cypress, California, to Loretta, a model, and William Stamos, a restaurateur, his father was of Greek descent, with the family surname originally being “Stamotopoulos”. John has two younger sisters named Alaina and Janeen, both school teachers. Stamos earned his first TV role as Blackie Parrish on the soap opera General Hospital in late January 1982, for which he was nominated for a Daytime Emmy Award in 1984.

He began relationship with Caitlin McHugh in 2015; became engaged on October 22, 2017. They married in February 2018. They welcomed their first child together, a son named Billy, in April 2018. He was previously married to Rebecca Romijn from 1998 to 2005. 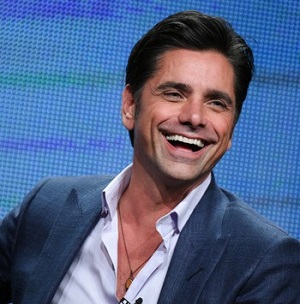 John Stamos Facts:
*He was born on August 19, 1963 in Cypress, California, United States.
*His ancestry includes Greek, Ashkenazi Jewish, German, English, and Irish.
*He played drums in his school’s marching band while studying in high school.
*He played Jesse Katsopolis in the ABC drama sitcom, Full House.
*He played Dr. Tony Gates in the medical drama TV series, ER.
*People Magazine named him one of the top 50 Most Beautiful People in the World in 1990.
*He was close friends with the late Don Rickles.
*He loves Elvis Presley.
*Visit his official website: www.johnstamos.com
*Follow him on Twitter, Facebook, TikTok and Instagram.