Miesha Tate is an American mixed martial artist who is a former UFC Women’s Bantamweight Champion. She began competing in the Ultimate Fighting Championship in February 2013 and won the bantamweight title in 2016. Miesha was born on August 18, 1986 in Tacoma, Washington to Michelle and Rob Tate. 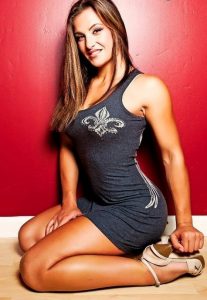 Relationships / Affairs / Boyfriend:
She was in a relationship with UFC fighter Bryan Caraway.

Miesha Tate Facts:
*She is a fan of American football team, Seattle Seahawks.
*She won a silver medal in the FILA Grappling Championships in 2008.
*She was ranked #58 on Maxim’s “Hot 100” list In 2014.
*She was named the Female Fighter of the Year at the MMA Awards in 2011.
*Retired her career with a record of 18-7.
*Follow Miesha on Twitter, Facebook and Instagram.