Mike Dopud is a Canadian actor. He is known for his roles in television, such as Durham County, Stargate Universe, Human Target, Continuum, Mistresses, Arctic Air, Dark Matter, Arrow, and Power, and in the films White Noise the 2005 action-horror film, Alone in the Dark a 2005 action-horror film, and the Rollerball 2002 film remake. Dopud played Vic Hadfield in the Canadian miniseries Canada Russia ’72. For his work in Walking Tall, he was nominated for a Taurus World Stunt Award in 2005. Born on June 10, 1968 in Montreal, Canada, the second son of a Yugoslavian family, he became a professional Canadian football player with the Saskatchewan Roughriders. He is married to Canadian actress Angela Schneider, with whom he has a son named Dane Dopud. 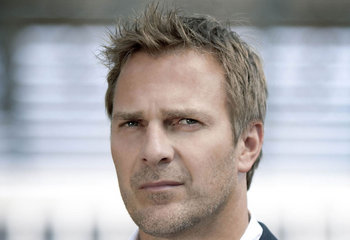 Mike Dopud Facts:
*He was born on June 10, 1968 in Montreal, Canada.
*He graduated from Southern Illinois University with a degree in Physiology and International Business Administration.
*He played professional Canadian football briefly for the Saskatchewan Roughriders.
*He is fluent in English, French and Serbian.
*He married actress Angela Schneider.
*Visit his official website: www.mikedopud.com
*Follow him on Twitter and Instagram.