Mikey Garcia is an American professional boxer who has held multiple world championships in four weight classes, including the WBC lightweight title since 2017 and lineal light welterweight title since 2018. Previously he held the WBO and Ring magazine featherweight titles in 2013, the WBO junior lightweight title from 2013 to 2014, the IBF junior welterweight title from March to April 2018, and the IBF lightweight title from July to October 2018. Born Miguel Angel Garcia Cortez on December 15, 1987 in Oxnard, California, USA, to Mexican parents Virginia and Eduardo Garcia, his father was an amateur boxer and trainer of world champion boxer Fernando Vargas at La Colonia Youth Boxing Club, and his older brother, Roberto was a professional boxer and a former IBF Super Featherweight Champion. His oldest brother, Daniel, was a boxer and trainer. He started his amateur career at just fourteen years old, and went on to win a National Junior Golden Gloves title in 2004 and National Golden Gloves title in 2005. He attended the Ventura County Police Academy where he graduated while balancing boxing with his studies. 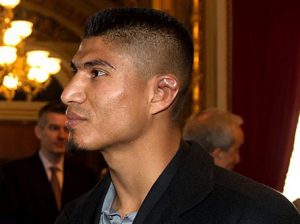 Mikey Garcia Facts:
*He was born on December 15, 1987 in Oxnard, California, USA.
*He made his professional debut on July 14, 2006.
*He is trained by his father Eduardo Garcia and his brother, former world champion Robert Garcia.
*He was ranked as the world’s fifth best active boxer, pound for pound in May 2018.
*Follow him on Twitter and Instagram.