Miranda Kerr is an Australian model who became famous in 2007 as one of the Victoria’s Secret Angels. She was the first Australian Victoria’s Secret model and also represented the Australian department store chain David Jones. She has also modeled for Dolly, Tigerlily, Roxy, Billabong Girls, One Teaspoon, Qantas, Maybelline, Vogue, and Marie Claire. In 2009, Kerr founded a brand of skincare products called Kora Organics. Born Miranda May Kerr on April 20, 1983 in Sydney, Australia, to parents Therese and John Kerr, she has a younger brother named Matthew. Kerr began modeling at age 13. She graduated from All Hallows’ School in 2000, and studied nutrition and health psychology at the Academy of Natural Living near Cairns, Queensland. She married Orlando Bloom in 2010, and the couple had a son named Flynn in 2011 before getting divorced in 2013. In 2017, she married billionaire Snapchat co-founder/CEO Evan Spiegel. They have two sons together. 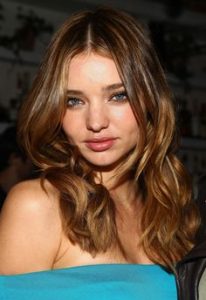 Miranda Kerr Facts:
*She was born on April 20, 1983 in Sydney, Australia.
*Her ancestry includes English, Scottish, French, and Irish.
*She started modeling at the age of 13.
*She was a gymnast when she was younger.
*She became the first ever Australian Victoria’s Secret Angel.
*In 2006, she was featured in a music video for the single “Number One” by artists Kanye West and Pharrell.
*In 2010, she appeared in the Pirelli Calendar, photographed by Terry Richardson in Bahia, Brazil
*She is good friends with Adriana Lima.
*Visit her official website: www.mirandakerr.com
*Follow her on Twitter, Pinterest, YouTube, Facebook and Instagram.