Mitzi Martin is an American actress and model. She is best known for her roles in the films Harley Davidson and the Marlboro Man, Dude, Joe DirtWhere’s My Car?, and The Island. As a model, Martin has appeared for several advertisements under leading brands such as L’oreal, Finesse Shampoo, Laise Adzer, Cutex, 000.1 studio by Ferre, and LA Eyeworks. She has also appeared on the cover or been featured in many international fashion magazines including Vogue Germany, Elle Spain, Elle Netherlands, Flare Magazine, Model, Moda Magazine, Estetica, and Harper’s Bazaar. Born Mitzi Ann Martin on December 27, 1967 in Los Angeles, California, she has one younger sister named Kayce. Martin first achieved fame as a fashion model, and was signed to top agencies such as Marilyn Models in Paris, the now defunct Bethann Models in New York, and Elite Models Los Angeles. She is married to Josh Todd with whom she has two children. 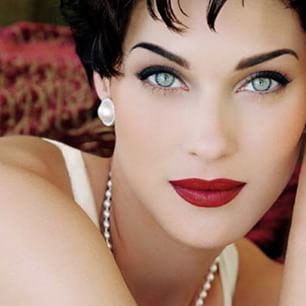 Mitzi Martin Facts:
*She was born on December 27, 1967 in Los Angeles, California, USA.
*She began her career as a fashion model.
*She made her film debut in Harley Davidson and the Marlboro Man (1991).
*Currently, she’s represented by Heffner Model Management in Seattle.
*”At 5’7″, she weighs 123.5 pounds and wears a size 4 dress.
*Follow her on Instagram.