Actress Morgan Fairchild was born Patsy Ann McClenny on February 3, 1950 in Dallas, Texas, the daughter of Martha Jane, a high school English teacher who taught at Richardson High School, and Edward Milton McClenny. Fairchild has a younger sister, Cathryn Hartt, who is also an actress. She began acting as a child, when her mother enrolled her in drama lessons after she was too shy to give a book report in class. From the age of 10, she performed in children’s plays. She played the scheming Jordan Roberts on Falcon Crest. In 2002, she played Babylonia in I Was a Teenage Faust. Fairchild is very beautiful lady with sparkling blue eyes and platinum blonde hair. 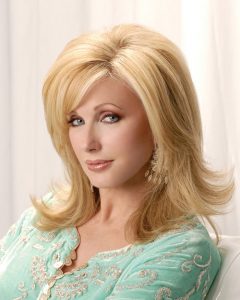 Morgan Fairchild Facts:
*Older sister of actress Cathryn Hartt.
*She is a moderate Democrat.
*At age 14, she competed for the Miss Teenage Dallas crown, but did not win.
*She was named “One of the 10 Most Beautiful Women in the World” by Harpers Bazaar in 1982.
*Follow her on Twitter.