Nadia Turner is an American dancer, best known for her dancing skills and performing in commercials for various multinational brands. Nadia first gained attention with her performances in commercials for such monumental companies as Sketchers, Target, and Staples. She has also performed for Disney, TweenTV, and Dancerpalooza. In 2018, she was cast in the Brat web series Total Eclipse. Born on April 19, 2004 in Los Angeles, California, USA, her younger sister Ruby Rose Turner is also a dancer. She also has two younger brothers named Alec and Alfie. Nadia trained in a variety of dance disciplines from jazz to ballet to hip hop with schools like the Rage and West Coast Dance Theatre. She has amassed more than 980k on her nadiaturner Instagram account. 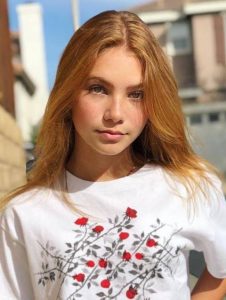 Nadia Turner Facts:
*She was born on April 19, 2004 in Los Angeles, California, USA.
*Her younger sister, Ruby Rose, is also a dancer.
*She appeared with Heidi Klum in a commercial for Jordache.
*She has worked with choreographers like Tricia Miranda and Josh Killacky.
*She was appeared in Johnny Orlando and Mackenzie Ziegler’s music video ‘Day & Night’ in 2016.
*Nadia and her sister Ruby Rose, created a YouTube channel Turner Sisters on October 10, 2013.
*Follow her on Twitter, YouTube, Facebook and Instagram.