Nadine Njeim is a Lebanese beauty pageant titleholder who crowned Miss Lebanon 2007 beauty pageant. She represented her country in Miss World 2007 in China and Miss Universe 2007 in Mexico. Nadine Njeim was born in Lebanon to Colonel Wilson Njeim and Therese Khoury Njeim from Maaser El Shouf. She has been married to Ramzi Deep since 2016. 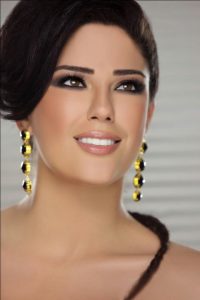 Nadine Wilson Njeim Facts:
*She was just 19 years old when she was crowned the winner of the Miss Lebanon 2007 beauty pageant.
*She has one brother named Pierre Njeim.
*Follow her on Twitter and Facebook.