Nakuul Mehta is an Indian television actor. He is best known for his portrayal of Shivaay Singh Oberoi on Star Plus’s Ishqbaaaz, and for his role as Aditya Kumar on Star Plus’s Pyaar Ka Dard Hai Meetha Meetha Pyaara Pyaara. In 2015, Mehta became the host of India’s Got Talent 6. He played Ved in the 2020 short film Ved and Arya. Born on January 17, 1983 in Udaipur, India, he descends from King Prithviraj Chauhan of Rajput Chauhan dynasty of Ajmer. Mehta’s father, Pratap Singh Mehta, is a veteran of the Indo-Pakistani War of 1971, while his great-great grandfather Laxmilal Mehta was the military-in-chief of the Mewar region. He did his schooling from Jamnabai Narsee School in Mumbai and completed his Master of Commerce from Mumbai University. In January 2012, Mehta married singer Jankee Parekh. 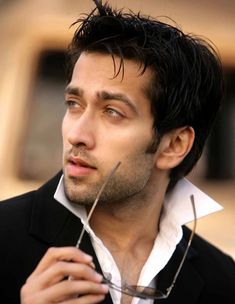 Nakuul Mehta Facts:
*He was born on January 17, 1983 in Udaipur, India.
*He is a trained ballroom dancer having learned under India’s foremost ballroom teacher and Bollywood choreographer Sandip Soparrkar.
*He was a silver medalist in the Latin Ballroom Category and is a gold medal winner in the Standard Ballroom category.
*He started his career as a model.
*He made his television debut in 2012 in Star Plus’s Pyaar Ka Dard Hai Meetha Meetha Pyaara Pyaara.
*Visit his official website: www.nakuulmehta.com
*Follow him on Twitter, Facebook and Instagram.